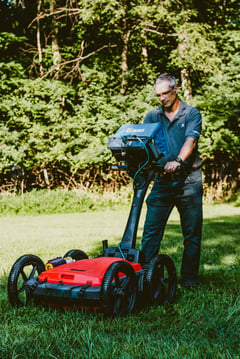 In layman's terms, Ground Penetrating Radar (GPR) works on the same principle as sonar or aerial radar (what the police use). A radar wave is pulsed into the substrate (ground, concrete, etc.) at a certain frequency.

Over time and distance, an image can be produced based upon the reflection of what the wave bounced off of. Typically, this image is in the form of peaks and hyperbolas in the data collected. If the wave finds nothing to reflect off of, it will gradually dissipate as it passes through the material. How deep the GPR wave travels is largely dependent on the material/soil it is trying to pass through.

Read our GPR Information Guide for a more in-depth discussion on how GPR Works.