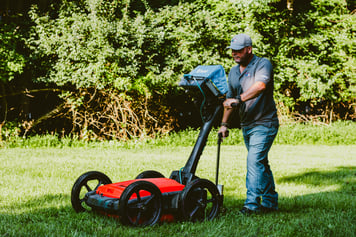 For a general question like “How deep can you see with ground penetrating radar (GPR)?”, the answer is usually a range such as “2 to 10 feet” or “up to 18 inches”. However, for a clients' specific survey area and survey goals, these kinds of answers are often not satisfying and can be misleading.

For example, you have been to many sites in a town and you know generally you can see about 4 to 5 feet deep with GPR in this area. So you tell your client what you generally know about the area only to find out that you can not see anything with GPR after you arrive at the site – the survey area was at a low ground and saturated with water, making the GPR penetrating depth very shallow.

For more specific questions like “Can you see through a 8-inch thick concrete pad with GPR?” or “The pipe is about 5 feet deep, can you see it with GPR?”. I hate to say “I don't know”, but that is the case until it's tried at the survey location. Conditions vary from site to site, from area to area within the same site, and location to location within the same area. It's difficult to be certain how deep you can see with GPR without trying it at the survey location.

These two GPR data profiles shown in the picture above were collected over a concrete floor side by side about 1 foot apart from each other. They were taken while locating an electrical conduit crossing them. The electrical conduit was clearly visible in profile 1 but not in profile 2. The concrete in profile 1 was the original concrete, while the concrete in profile 2 was newer (it's the replacement after the original concrete was removed for the access below). This conduit was first discovered pipe tracing with a cable/pipe locator. The portion of this conduit within this newer concrete area was about 5 to 6 feet long, and the GPR data collected within this area were all like profile 2.

The electrical conduit was simply hard to see within this area but clearly visible once outside this area. Apparently, even thought the entire floor is concrete, there are big differences in GPR penetrating depths across the floor.

Because GPR penetration depth is affected by individual subsurface layers, it's harder to estimate actual depth until on-site. Just like a sheet of paper right in front of your eyes can totally block your view, a thin layer of electrically conductive materials can totally block the GPR view. For example, sandy and silty soils are relatively “good” for GPR while clayey soils are not. You can say “the soils at the site are composed of MOSTLY sands and silts”, but a thin clay layer only a couple of inches thick at a shallow depth could severely block the GPR view and make the rest of the "good" soils irrelevant.

For another example, a layer of asphalt pavement usually is not a big problem for GPR unless it's really new or a special kind of asphalt. Again, until we get there, how do you know there are not other layers of something like concrete beneath the asphalt pavement? Sometimes there could be a layer of gravel, and then another layer of asphalt beneath it. All these additional layers could impact the GPR penetration depth and/or performance in a negative way, and sometimes a single “bad” layer or layer interface could severely block the GPR view, regardless the rest of the “good” subsurface materials.

In conclusion, it's really hard to answer the question “How deep can your see with GPR?" In general, the question should not be answered without giving context such as the site conditions, the target characteristics and the GPR antenna frequencies to be used, etc.

In most situations, no matter what the answer is, the bottom line is... “We don't know until we try it out”.