Utility Survey Corp. was contracted to locate underground transite pipes at a school property. Transite pipes contain asbestos and could be a potential environmental concern. The goal was to find them for removal.

The transite pipes were used as HVAC ducts for a building and there were about a dozen air vents around its perimeter. The underground transite pipe ducts were supposed to connect these vents to a basement where air was supplied. However, the exact routes of these ducts was unknown.

A ground penetrating radar (GPR) survey was conducted by Utility Survey Corp. Although the ground surface was covered by concrete slabs, it turned out that the GPR penetrating depth was good in the majority of the survey area, and a number of underground pipes were detected. Since the purpose of the survey was to find only these transite pipe ducts, properly identifying them among all the other detected pipes was necessary. 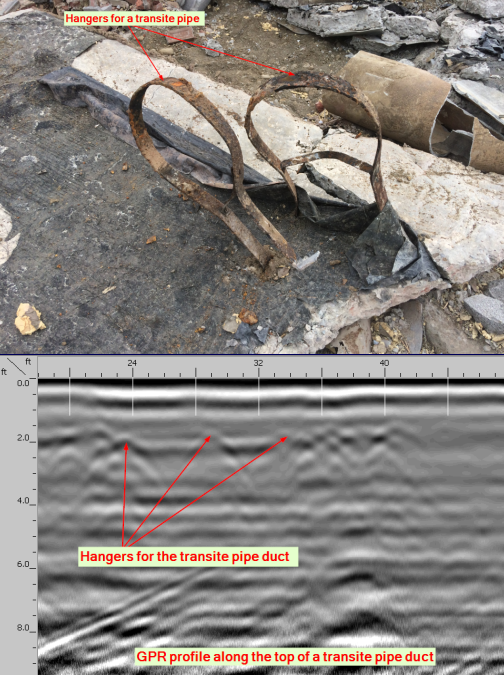 Through initial screening, some pipes were ruled out due to incorrect properties that were instead related to metallic piping/conduits, incorrect burial depths, etc. However, it's suspected that there might be storm drain pipes with similar GPR data signatures and buried in similar depths to those of transite pipe ducts. Also, the ground level of the survey area was not uniform and it's uncertain whether all the transite pipes have the same diameter. All these factors make it difficult to separate ducts from storm drain pipes through the initial GPR scanning.

Fortunately, a transite pipe had already been excavated at a location and it's found that there were steel hangers around it. The GPR scan was then conducted right along the top of detected pipes and the signatures of hangers were found at some of them but not the rest; the layout of these pipes with hangers turned out to fit well in the overall layout of the HVAC system. Thus the routes of transite pipe ducts were considered located successfully.

Below shows 3 GPR profiles of some detected pipes including the transite pipes at different locations. 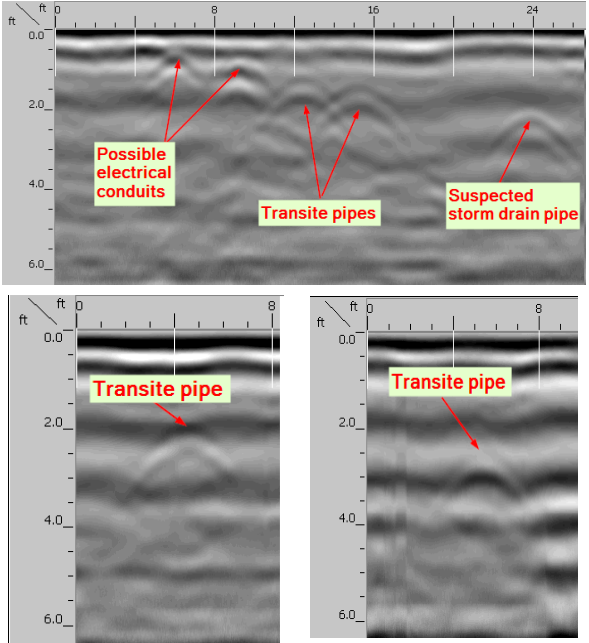 From the GPR profiles, we can see that the signatures of transite pipes were not uniform in terms of reflection phases/amplitudes. It's probably due to different burial depths and overlaying materials. All these make it difficult to uniquely identify them without other evidences such as those from the hangers.

As with any other scanning tools, GPR is only a tool and by itself, it will not tell you what's underground. Whatever you get from GPR scanning needs interpretation. Ground truths about subsurface host materials and target characteristics are helpful and sometimes critical for proper interpretation. In this case, knowing the ducts have hangers played an important role in identifying them.

That is why, at Utility Survey, each of our technicians follow our proprietary "10-Step Utility Locating Protocol™" which allows us to use all the tools we have.