Clearing Boring Locations and Drilling...Should it Be Completed the Same Day?

Before drilling holes into the ground for soil/water samplings, a underground utility survey should be conducted to avoid hitting any present utilities.

For the purpose of convenience, efficiency or cost-saving, clearing boring locations for utilities and drilling are often scheduled on the same day. However, this practice has its downside: clearing boring locations on the same day as drilling may not be as thorough as it could be. In other words, the risk of hitting underground utilities are often not minimized. Why?

It could make sense...each boring location is cleared first and the drilling will follow; while the drilling is happening at cleared locations, the utility locator can work on other proposed drilling locations.

Let's look at a few examples of why this could present a problem...

If you schedule the boring clearing and drilling on the same day, technically you are rushing the utility locator, although unintentionally.

You can say "take your time, no rush", but it's definitely a pressure when you have a drilling crew standing by waiting for you. For clearing boring locations, although there is usually a general practices in every utility locating company for locators to follow, the actual practice done by a locator depends on the site condition and the locators experience. There isn't a sharp boundary upon which a locator can say a location is definitely cleared or not. The more time a locator spends on a site, the more confident he will be with the survey results at any given locations.

The moral of the story...whenever possible, try not to schedule boring clearing and drilling on the same day! 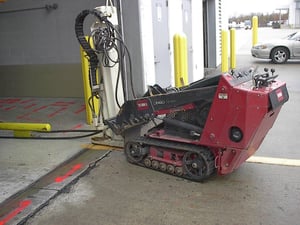 But if you have to, try to be patient while waiting for the first boring location to be cleared. Before giving the green light for the first boring location, an experienced underground utility locator will try to minimize the risk by getting a good feel about the whole site, or at least a relatively large area around the location, not just a single point or a 10-ft x 10-ft box. This could include carefully reviewing site plans, visual inspection of both interior and exterior portions of the site, etc. All these activities in addition to the actual locating take time. Be patient!

Our technicians are trained to follow our proprietary "10-Step Utility Locating Protocol" reducing room for error! Download your copy here!

Then call Utility Survey Corp. for all your utility locating needs!