This video referenced seven different “sins” contractors often commit when a utility gets hit and a tragedy happens. However, when looking at the facts surrounding these incidents explained in the video, I believe “sins” is actually the wrong word. I believe the term “attitudes” may be more applicable. Read on and maybe the reader will agree.

The seven deadly “attitudes” are as follows:

Preoccupation is another word for distraction. And in these modern times, we have more distractions than ever. Cell phones, GPS voices in your cab or car, lingering thoughts on past conversations, arguments, the guy who cut you off…, etc. In essence….we’re human. However, procedures may have to be in place if evidence suggests that employees/contractors are showing signs of distraction.

Detachment is often described as not knowing what’s ahead or what’s going on around you. I would go one step farther. I would call it the inability to see how one’s actions could be “attached” to another by affecting them in a potentially detrimental way. Not realizing your actions could be a potential link in the chain of disaster may not be the best characteristic for a contractor.

In the “Digging Dangers” video, the narrator highlights an incident where a contractor hit a gas line, knew he hit a gas line, was told by residents they smelled gas, and still refused to call it into the gas company and 911. How is that for spiteful and borderline sociopathic? The result was an explosion with a fatality and tremendous property damage. The contractor was later arrested.

Ambiguity is simply not taking the time to create certainty with all the people involved in an excavation situation on what the scope and plan of the work is. In essence, not creating the proper communication channels with utility companies, utility locators, engineers and excavating contractors. Where there is uncertainty, there are mistakes, when there are mistakes, utilities get damaged, and when utilities get hit lives can be lost.

Egoism is simply acting with a “How does it affect me?”, attitude. Purely in self interest without regard to the interest of others. This attitude creates the rationale for shortcuts, lack of foresight and the inability to have empathy. This attitude often creates the atmosphere for an accident where time and chance creates the opportunity.

Ignorance is a place we have all been. But when a utility strike happens, it’s usually based on the assumption that there can’t be any utilities in the area to hit. A contractor can be protected from ignorance when protocols are followed. In the  “Digging Dangers” video, the contractor just assumed there was nothing in the farmer’s field. If he had followed his dig-safe protocol and made the call, he would have never hit the 16-inch gas transmission main.

“If even for a moment you can feel that pain...you know you dont want to be there!”

When we think of negligence, often we think of people deliberately doing something that indirectly causes harm to people. Often the intention is good but the action is wrong. This part of the video showed a contractor who started out doing all the right things; had his markout done, potholed the utilities to know the elevation but still a utility was hit. Accidents, unfortunately, can still happen. How you react can then mean everything. Gas was leaking and the contractor called the utility company but never called 911. Emergency services weren’t there to evacuate people and protect from fire. Casualties ensued.

The only way to avoid this is proper safety training and planning. Ignorance and negligence often go hand-in-hand.

Utility Survey Corp. has the knowledge and experience to know that these “sins” or “attitudes” can do great harm.

We endeavor to create an atmosphere of safety through our proprietary "10-Step Utility Locating Protocol™" and safety trainings.

We try to always start a job with the question “What’s the worst thing that could happen…?” and make sure that worst is never the case!

We are concerned for the safety of our clients, the general public and our own employees. 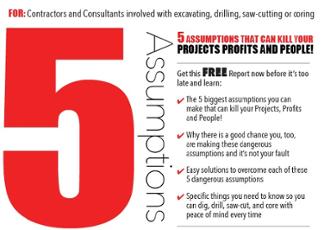 We Are Prepared to Offer Peace of Mind!

Get the Locate Job Done!